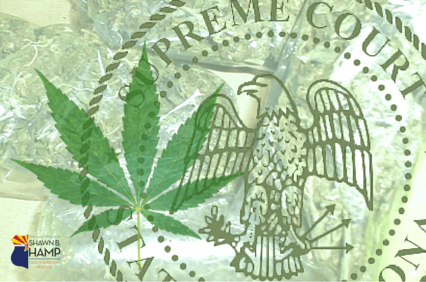 The Arizona Court of Appeals in Ishak v. McClennen overturned the DUI conviction of Nadir Ishak for DUI by a medical marijuana patient under A.R.S. 28-1381(A)(3).  The opinion issued by the Court on December 22, 2016, ruled that Mr. Ishak was entitled under the Arizona Medical Marijuana Act to present an affirmative defense that he was authorized to use medical marijuana and could present evidence either by opinion testimony, cross examination of state's witnesses, or expert testimony that the metabolite of marijuana (THC) in his system was insufficient and did not cause impairment.

The 2-1 opinion by the Arizona Court of Appeals follows the previous opinion made by the Arizona Supreme Court a year earlier in Dobson v. McClennen, 238 Ariz. 389, 393, ¶ 23 (2015).  The Arizona Supreme Court in Dobson ruled that a medical marijuana patient charged with a DUI  “may establish an affirmative defense to such a charge by showing that his or her use was authorized by the AMMA (Arizona Medical Marijuana Act) . . . and that the marijuana or its metabolite was in a concentration insufficient to cause impairment.”

Nadir Ishak was charged with and convicted of a DUI by drugs prior to the ruling in Dobson v. McClennen in the Arizona Supreme Court. The trial judge precluded him from presenting evidence that he was authorized to use medical marijuana. Mr. Ishak was found guilty of DUI by having drugs in his system, but was acquitted by the jury of DUI for impairment of drugs to the slightest degree.

Ishak appealed the ruling to the Superior Court. The Superior Court Judge denied Mr. Ishak's appeal by stating that despite the evidence of the medical marijuana card, Mr. Ishak was not entitled to an affirmative defense because he could not prove that the level of THC in the defendant's blood could not cause impairment to ANY human being at the level reported.

Ultimately, the Court of Appeals in Division 1 overturned the conviction and remanded the case to the trial court for further proceedings.

The ruling is considered a setback to prosecutors who must still prove actual impairment of Marijuana in a Defendant's system if they are a medical marijuana patient.  Prosecutors argued to the Court of Appeals that the Defendant had the burden to present scientific evidence and expert testimony that the concentration of THC in the sample result is “insufficient . . . to cause impairment in people generally,” or “in any person,” without regard to whether the defendant actually was impaired at the time of the stop.

The Arizona Court of Appeals disagreed with that argument.  The appellate judges ruled that  “unless and until some law establishes a non-rebuttable level of THC at which a driver is presumed to be impaired, the affirmative defense available to a qualifying AMMA cardholder charged with violating § 28-1381(A)(3) requires proof that he or she was not actually impaired, not whether, in the abstract, the same THC concentration could not impair any human being.”

Despite Ishak's blood containing 26.9 nanograms of THC per milliliter there is no legal threshold amount for THC limits such as blood alcohol legal limits in Arizona.  The Court of Appeals acknowledged that there is “no scientific consensus about the concentration of THC that generally is sufficient to impair a human being.”