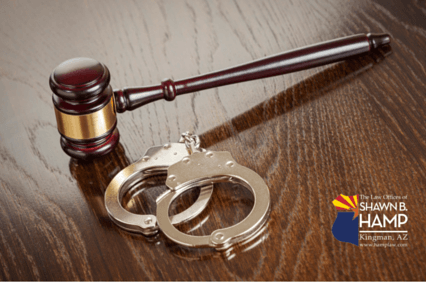 If you've been arrested and charged with a crime in Arizona, you probably have questions about your case's journey through the criminal justice system. This is especially true if you've never been accused of committing a crime, before.

Here's a brief overview of the path through the criminal justice system that a case usually takes, once you've been arrested and formally charged.

The American criminal justice system relies heavily on guilty pleas and plea bargaining. While there are no hard numbers, the federal court system estimates that more than 90% of defendants plead guilty, rather than go to trial. For some cases, that number is even higher – an estimated 97% of those who are charged with a federal drug crime plead guilty.

Plea deals can happen anytime between the formal charge and the end of your trial, and are greatly influenced by the evidence that gets gathered by your criminal defense attorney and the prosecution.

If you refuse to plead guilty to the crimes you're being accused of, your case will go to trial. These are the events that you often see on TV shows like Law and Order, with the prosecution presenting its case against you, and then your defense lawyer countering their evidence.

Trials can be heard by a jury, or by the judge alone. If only the judge hears the case, it's called a bench trial. There are pros and cons behind each one, as judges are less likely to have sympathy for you, while juries are more likely to have their emotions played with by the prosecutor.

If you're found not guilty during trial, you're free to go and your case is over. However, if you're found guilty, your case progresses to the sentencing process. For More CLICK HERE

If you're found guilty of the charges against you, the next issue is what the sentence will be. Contrary to popular belief, the sentence for a crime is not exactly set in stone: Your attorney can still be a huge asset in reducing the amount of jail time or other consequences you could face. For More CLICK HERE

If you're found guilty, you can appeal your conviction to a higher court if there are grounds for appeal. If your trial was held in one of Arizona's justice courts, then your appeal would go to one of the two Arizona Courts of Appeals. If the crime you were charged with was a federal one and your trial was held in a U.S. District Court, your appeal would go to the U.S. Court of Appeals for the Ninth Circuit, in San Francisco.

Having a criminal defense attorney like Shawn Hamp at your side can be a huge aid at trial. He can also improve the outcome of every other aspect of a criminal case. By examining the prosecutor's evidence and gathering proof of your innocence, criminal defense attorney Shawn Hamp can help you make decisions during the plea bargaining process or help you negotiate for better terms. He can also advocate on your behalf during the sentencing portion of your trial to reduce the penalties you could face, and fight for your rights on appeal.