Immigration Consequences and Your Criminal Case

Deportation can be defined as “the formal removal of a foreign national from the U.S. for violating an immigration law.” There are numerous reasons that a person can be deported including, but not limited to: violating the terms or conditions of a visa, committing marriage fraud, or falsely claiming to have U.S. citizenship. Another ground for removal is being convicted of certain types of crimes. Thus, a person who is not a U.S. citizen may have to face both criminal penalties and immigration consequences for their actions.

This page will give a brief overview of the immigration consequences of a criminal conviction. If you have been charged with a crime and you are concerned about the impact that it could have on your immigration status, please do not hesitate to contact Hamp Law today. 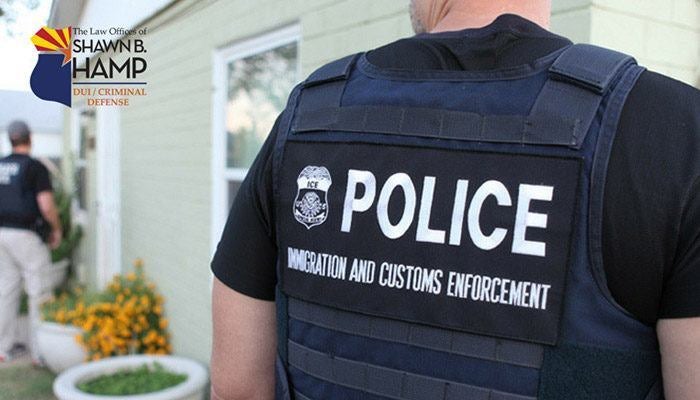 A criminal conviction for a crime of moral turpitude or drug offense can threaten an immigration status.

It is important to be aware that not every crime is a deportable offense. There are only certain types of crimes under the immigration laws that may result in an individual being subject to removal proceedings. Some of these offenses are discussed in further detail below.

A felony is a crime that is punishable by more than a year in jail. In Arizona, there are numerous crimes that are considered to be felony offenses. These offenses include things like murder, rape, violent crimes, robbery, fraud, and obstruction of justice. In addition to these, for some crimes, a first conviction is a misdemeanor but a second conviction is a felony. For example, under A.R.S. 28-708, the crime of racing on a highway is a misdemeanor for a first offense and a class 6 felony if convicted a second time within twenty-four months.

There are both misdemeanor and felony drug offenses in Arizona. Whether a crime is considered a misdemeanor or a felony depends on the type of drug involved, whether the individual is charged with selling the substance or merely possessing it as well as a number of other factors. However, federal immigration law is very broad when it comes to drug offenses. The law states as follows:

Any alien who at any time after admission has been convicted of a violation of (or a conspiracy or attempt to violate) any law or regulation of a State, the United States, or a foreign country relating to a controlled substance (as defined in section 102 of the Controlled Substances Act (21 U.S.C. 802)), other than a single offense involving possession for one's own use of 30 grams or less of marijuana, is deportable. 8 U.S.C. 1227(a)(2)(B)(i).

Thus, simple possession of substances like heroin or meth could be a deportable offense. In addition, the sale, manufacturing, or trafficking of an illicit substance, including marijuana, could also result in a non-citizen having to go through deportation proceedings.

There are a number of different crimes that fall under the category of crimes involving moral turpitude. The federal statute states that

In addition, the law states that “Any alien who at any time after admission is convicted of two or more crimes involving moral turpitude, not arising out of a single scheme of criminal misconduct, regardless of whether confined therefor and regardless of whether the convictions were in a single trial, is deportable.”8 U.S.C. 1227(a)(2)(A)(ii).

Though "[t]he term moral turpitude is not defined under federal law, according to U.S. Citizenship and Immigration Services, “courts in the United States have defined [moral turpitude] generally as an act that is inherently base, vile, or depraved, and contrary to the accepted rules of morality and the duties owed between persons or to society in general.”

Other types of crimes that could result in deportation include, but are not limited to: high-speed flight from an immigration checkpoint, domestic violence, failure to register as a sex offender, and certain weapons and destructive devices offenses.

Immigration is a highly politicized issue with strong opinions on what the laws should be and how they should be enforced. As of 2017, the current administration has stepped up enforcement of immigration laws. To learn more about the executive order pertaining to this issue, check out the blog post: "CRIMINAL CONVICTIONS AND IMMIGRATION STATUS."

If you do not have U.S. citizenship and have been charged with a crime, it is important to work with an attorney that understands immigration laws and the potential consequences a criminal conviction could have on your life and immigration status. The attorneys at the Law Offices of Shawn B. Hamp are well versed in the consequences that may arise from federal immigration laws as a result of a criminal conviction. Our attorneys have years of experience defending those who have been accused of committing a crime and will fight for your rights. Contact the office today at 1-866-490-HAMP for a free case consultation.