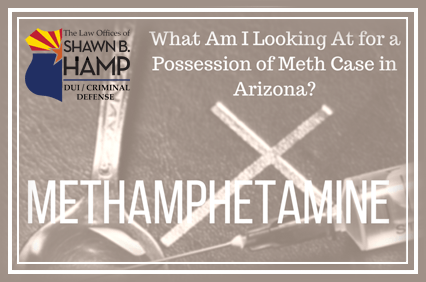 In the mid-nineties Arizona voters passed a bill called “Proposition 200”.  The referendum was enacted and codified as Arizona Revised Statute (A.R.S.) 13-901.01.  Non-violent offenders convicted of possession or use of a controlled substance for first time offenses could only be sentenced to probation and receive no incarceration jail or prison time. The penalty for possession of Methamphetamine in Arizona could include:

METH IS A JAIL ELIGIBLE OFFENSE

At the time Prop 200 was enacted methamphetamine use was on a steady increase.  Home-grown meth labs became more common. These labs were often raided and laws became stricter to stop the scourge and rapid increases in Meth use. It was even early in the 2000's that demand for Meth increased so significantly that super labs in Mexico became the primary source of the illegal drug in Arizona to satisfy demand and elude increased drug enforcement raids.

Meth is classified under Arizona law as a “Dangerous Drug”.  Possession of a Dangerous Drug for personal use, including Meth is a Class 4 Felony. To combat the war on Meth, Arizona enacted Proposition 301 in 2006 which made Possession of Methamphetamine eligible for jail or prison–even for first time users.

The point of this legislative history of meth laws is to show that if you are convicted of possession of methamphetamine you are very likely going to be ordered to serve jail time unlike every other type of first time drug offense.

Someone who is convicted of possession of meth could also face prison time for a Class 4 Felony with a probation range of up to four (4) years or prison between one (1) to three and three/quarter (3.75) years prison.

If you are convicted of possession of methamphetamine you would be ordered to complete drug counseling and pay a minimum fine of $750 plus an 83% surcharge and a $15 assessment ($1,387.50).

Possession or Transportation of Methamphetamine for Sale A.R.S. § 13-3407