Consequences Of A Refusal In A DUI Case

When a DUI suspect is placed under arrest in Arizona, a police officer will request that the driver submits to a scientific test to determine their alcohol concentration or presence of drugs in their circulatory system. These tests can be accomplished by having the suspect submit to an intoxilyzer test (breath test), or a blood draw (by a qualified phlebotomist).

When Can A DUI Suspect Refuse a Test?

In any criminal investigation, a defendant does not have to submit to any tests without their voluntary consent.  However they still could lose their driving privileges under Arizona's Implied Consent Law, and a police officer can always request a search warrant to draw blood from a suspect if they refuse to give consent.

Losing Driving Privileges Because of a Refusal

Once a driver has been arrested for suspicion of DUI, a police officer must give an admonition to the suspect stating that they have been placed under arrest. They additionally will advise that to maintain driving privileges they must give consent for a sample of their blood, breath, or urine to be taken to determine the presence and concentration of alcohol or drugs in their body.  Failure to give this consent will result in having their license suspended for twelve (12) months. This is called “Implied Consent” under Arizona law.

Requesting a hearing is vital.  It prevents an automatic suspension and requires the State and the police officer to give sworn testimony before a suspension goes into automatic effect. This allows a defense attorney to cross-examine the officer under oath to testify about the circumstances of the DUI investigation and challenge any evidence that the suspect actually refused.

There may be several defenses at an Administrative Hearing to prove that the refusal suspension is not valid.  A suspect may have had difficulty in submitting to a test or requested to speak to an attorney. Sometimes a suspect is not given a proper reading of the admonitions or might have changed their mind and have given consent to a test without unnecessary delay or inconvenience to the officer administering the tests.

If an administrative law judge determines that the suspect did not refuse a breath or blood test, then the twelve (12) month suspension is dismissed.

Risk of Refusal Does Not Include Field Sobriety Tests

A DUI test includes a scientific test of a suspect's “Blood, Breath, or Urine”. These scientific tests are designed to test for the presence of alcohol or drugs and give an “accurate” reading of the concentration of those drugs in the blood and circulatory system. These tests include a breathalyzer (aka intoxilyzer) or a blood draw.

For purposes of this discussion, alcohol and scientific tests do not refer to Standardized Field Sobriety Tests (FSTs) performed in the field during the DUI investigation and do not include a Portable Breath Tests (PBTs).

FSTs and PBTs are tests used in the field or shortly after a suspect has been pulled over for suspicion of DUI.  They have the limited purpose for a police officer to determine probable cause to make an arrest.

FSTs are also used as circumstantial evidence to prove impairment of a driver.  There is no legal requirement or obligation to perform these tests for a police officer. A PBT is not a device approved and maintained to report an accurate reading of a suspect's alcohol concentration and its results are not admissible in court.  A suspect may refuse to submit to these tests at any time.  There are no consequences to driving privileges by refusing these Standardized Field Sobriety Tests.

Refusal In a Criminal Case and Search Warrants

Despite Arizona's “Implied Consent Law”, a defendant still has the right to refuse a blood test and not give “Actual Consent” to a blood test for purposes of the criminal investigation. Several recent cases before the Arizona Supreme Court have affirmed that absent probable cause for a search warrant, or consent, an officer may not draw a sample of the suspect's blood.

This refusal, however, does not prevent a police officer from requesting a search warrant be issued by a judge or magistrate to force a blood draw on a suspect. 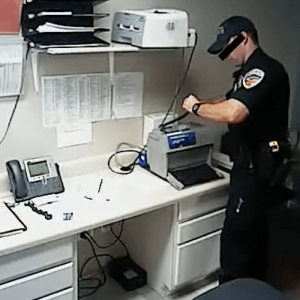 In a typical DUI scenario, a suspect who is placed under arrest will be asked to submit to a breath test.  In rural counties in Arizona (such as Mohave County, Yavapai County, or La Paz County) the suspect is usually taken to a station or a jail to perform a breath test on a machine called an Intoxilyzer 8000. Despite some inherent limitations in determining the accuracy of a subject's alcohol concentration and a complete inability to detect the presence of drugs, a breath test is deemed to be more convenient and does not require taking a suspect to a hospital or having a qualified trained phlebotomist on call.

A suspect is read the admonitions of the Arizona Implied Consent Law and an officer will ask the subject for consent to do the breath tests.  Sometimes a defendant will try to “game” the instrument and not blow effectively into the device. Some suspects may be physically limited in giving a sample or some suspects refuse to outright give a sample. In this scenario, a police officer will usually request a search warrant.

A police officer must then present an affidavit and request a telephone search warrant to get a blood sample.  The judge or magistrate considering the testimony of the officer given over the phone will determine if there is probable cause that a crime was committed and then authorize a blood draw.  A suspect is then served with a search warrant to collect their blood and they are usually taken to the hospital to have the blood drawn by a phlebotomist.  If a police officer is properly trained and licensed as a phlebotomist, they may take the subject's blood at the police station.  After being served with the warrant the suspect may voluntarily present their arm for purposes of taking the sample, or they may end up being forcibly restrained for the sample to be taken.  The sample of blood will be collected and preserved in a blood testing kit.

After the blood sample is collected it is later sent to the AZ DPS Crime Lab for analysis.  It could take several weeks or months to process before any tests results are given.  In the meantime, a suspect can still get arrested and taken to jail without the known results.  The criminal case will usually proceed.  The administrative law hearing will also be simultaneously scheduled for MVD to determine if the driver's license should be suspended because of the refusal.

A refusal of a breath or blood test may be used later as evidence at trial. Under A.R.S. 28-1388(D) refusal of a test is admissible at any criminal or civil proceeding. This circumstantial evidence may be deemed as relevant circumstantial to prove consciences of the defendant's guilt.  This statute has been challenged before as an undue comment on a defendant exercising their 4th amendment rights but as of yet no recorded opinion in Arizona has struck down the constitutionality of this statute.