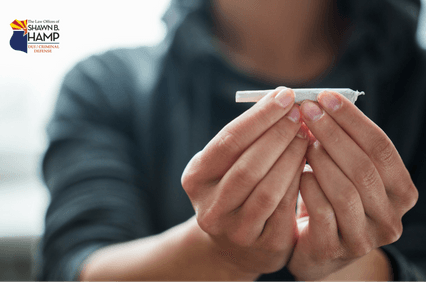 What You Need To Know About AZ Medical Marijuana Laws and DUI.

On November 2, 2010, Arizona voters passed the Arizona Medical Marijuana Act (AMMA) decriminalizing possession of marijuana for qualified medical patients so long as they abide by the terms of the Act.  While the AMMA very clearly decriminalizes the possession and use of medical marijuana in Arizona, the possessor/user must obtain an identification card issued by the Arizona Department of Health Services.

Previous Articles at Hamplaw.com have identified the four ways that a person may be charged with Driving Under the Influence in Arizona. The third of four ways states that a person commits DUI by driving or being in actual physical control of a motor vehicle and having an illicit drug or its metabolite in his or her body.  Prior to 2014, this meant that any person who had a metabolite of marijuana in their body could be convicted of DUI even if they were not in any way impaired by marijuana or its metabolite.

Metabolites of Marijuana by Itself Is Not DUI

In 2014, there was a significant change in Arizona's DUI laws related to marijuana use.  The Arizona Supreme Court ruled that the reference to “metabolite” in the DUI statute was limited to those metabolites that are capable of causing impairment.  One such metabolite for marijuana is Carboxy-THC, which can stay in ones' system for a significant period of time dependency on that person's frequency of marijuana use.

Compliance with the AMMA and DUI

Possessing a medical marijuana card does not provide a person with immunity from being prosecuted for DUI-Drugs based on marijuana consumption.  What it does do is create an affirmative defense for anyone charged with DUI-Drugs based upon having the metabolite of marijuana in their system.

To present an affirmative defense to this charge, the person must show that they complied with the AMMA and that the concentration of the metabolite was not sufficient to cause impairment.  This begins with establishing that the person validly possessed a medical marijuana card.  This creates a presumption that the person is engaged in the use of marijuana pursuant to the AMMA, so long as the amount of marijuana does not exceed the permissible amount.

If stopped and the police believe that you have ingested marijuana anytime recently, you are likely to be arrested and charged with DUI – Drugs.  If you are not under the influence of the marijuana, you likely have a defense to this charge if you are complying with the AMMA.

What to Do if You are Charged with DUI – Drugs

If you possess a medical marijuana card and are charged with DUI-Drugs based in any part on the use of marijuana, you need to contact The Law Offices of Shawn B. Hamp to examine all the available evidence in your case.