A criminal arrest can change your life forever.

An arrest can be a traumatizing experience.

Police officers use aggressive interrogation techniques to extract confessions. It is important to remember that you never need to answer questions by a police officer. At all times you have the right to remain silent and to have an attorney present during any interrogation.

An experienced private criminal attorney works to defend your rights during every phase of the court process.

The Justice of the Peace will advise the Defendant of the charges they have been arrested for and will set a bond and release conditions while a Defendant is awaiting trial.

A defendant who is in custody on Felony Charges will have their case scheduled for a Preliminary Hearing. The government must prove that there is a preponderance of evidence for criminal charges to go forward before the case is transferred to Superior Court. A Preliminary Hearing must be conducted within 10 or 20 days depending on whether a Defendant is held in our out of custody.

In some counties, a Court will set a hearing for Early Disposition Court (EDC). This is a type of hearing where the Government will give initial disclosure to a defense attorney and often make a quick plea offer to a Defendant to get the case resolved “Early”.

A prosecutor oftentimes says that they will make their “Final and Best” offer at EDC Court. It is absolutely critical to have a defense attorney at this stage to advise you on what to do next.

Sometimes the State will present a criminal case to a secret panel known as a Grand Jury. A group of jurors must make the same determination if criminal charges are brought. Only the most serious cases are often presented to Grand Jury before they are transferred to Superior Court.

Every phase of the criminal trial process is important.

An initial hearing, known as an arraignment, will decide important questions moving forward such as pre-trial conditions of release and the production of evidence by prosecutors.

A lawyer could also work to weaken the prosecutor's case long before the charges get to trial.

By examining the legality of the police work that led to the arrest and how the police gathered evidence, attorneys could file pre-trial motions designed to exclude this evidence from a future trial.

Finally, if the case does go to trial, an attorney works to help select a fair jury, to cross-examine any government witnesses, and to present evidence to challenge the government's case in a clear and convincing manner.

With years of experience, as a former Deputy County Attorney/Prosecutor and as a Criminal Defense Attorney, Shawn Hamp has handled thousands of criminal cases. The Law Offices of Shawn B. Hamp defends persons accused of felony crimes in Northern Arizona.

The Law Offices of Shawn B. Hamp is rated AV® by the Martindale-Hubbell™ Peer Review Ratings System. Martindale-Hubbell's AV Rating is the highest level of professional excellence at which a firm can be ranked by its peers.

A Felony crime in Arizona is an offense that is punishable with prison.  Felony crimes by their very nature are more serious and severe than minor or Misdemeanor crimes. Felony crimes include the following;

In Arizona, felonies are serious crimes that are punishable by more than one year in prison. Under Arizona law, felonies are categorized into six classes: Class 1 felonies through Class 6 felonies.

Class 1 felonies are the most serious Arizona felony and include homicide offenses.

Class 6 Felonies are the least serious felonies and are only punishable with a maximum of two years in prison and under certain circumstances may be charged as a misdemeanor offense.

In addition to the different classes of felonies, there are enhancement categories that may substantially increase the amount of prison time that can be imposed for a Felony Offense.  These categories include “Dangerous Offenses”, “Dangerous Crimes Against Children”, and “Repetitive Offenders”.

Some crimes like possession of methamphetamine for sale also have exclusively enhanced sentencing. 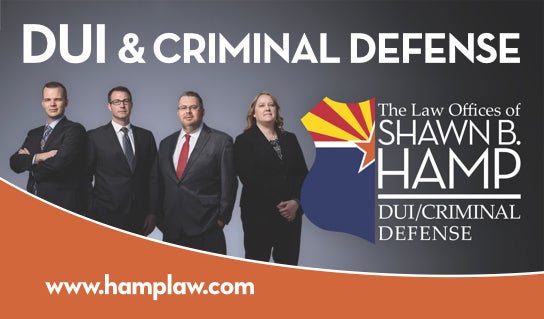 The experienced attorneys at the Law Offices of Shawn Hamp help individuals in Northern Arizona charged with serious crimes. Call Today to Get A Free Case Evaluation.

A statute of limitations is a time period set by the legislature to limit how long the State and prosecutors may charge an individual with a crime.

Crimes of homicide or violent sexual assault or misuse of public monies have no time limitations.

Any period in which a person is out of the State or on a bench warrant does not count towards the time limitations.  See Arizona Revised Statutes 13-107.

The Importance of Hiring an Attorney When Facing Felony or Misdemeanor Charges.

If convicted of any Felony or a Misdemeanor it will be part of your permanent record.  There is no “expungement” or “sealing” of crimes in Arizona.  Being convicted of a crime could result in a prison sentence or jail time, and decrease your chances of finding quality employment.  You can lose your civil rights to vote or possess a firearm.  Being convicted of multiple felonies or having a prior felony conviction could result in enhanced and greater prison sentences.

"If you are looking for someone that will treat you with respect and that will listen to you at all times, Shawn Hamp is the right choice. Very thorough in his work his and result on your case will backup his professionalism. Thank you Mr. Hamp - ⭐⭐⭐⭐⭐"

Hiring an experienced trial lawyer can help determine whether there are any defenses or reasons for dismissal of any felony charges.  A criminal lawyer can help negotiate any possible plea agreements or represent you at a jury trial in Superior Court.  An experienced criminal defense attorney will know the local court system and can assess possible outcomes in Court or with local prosecuting agencies and can advise you on the best courses of action.

I have won trials or had dismissals for a variety of crimes, including but not limited to Aggravated Assault, Attempted 1st Degree Murder, Possession of Dangerous Drugs for Sale, Child Molestation/Sexual Conduct with a Child, DUI's, and Domestic Violence. Any ethical attorney will not guarantee what will happen in any given case, but my firm promises to do the very best possible job it can for every client and every case.

For more information about Arizona criminal law, Arizona criminal courts, the criminal process, or to discuss your felony criminal charges with an experienced criminal defense attorney, please call us at 928-753-6868, email us or fill out the case evaluation form on our Contact Us Page. Let the Law Offices of Shawn B. Hamp and our attorneys help you!