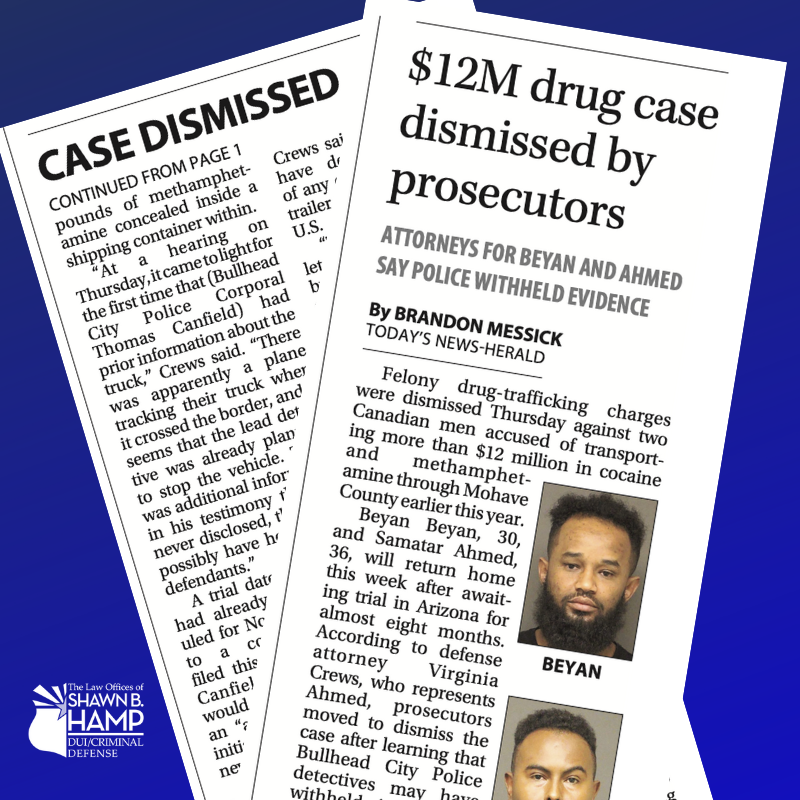 The Law Offices of Shawn B. Hamp in the news. Congratulations to partner Virginia Crews for effort in getting a case against our client dismissed.

Beyan Beyan, 30, and Samatar Ahmed, 36, will return home this week after await- ing trial in Arizona for almost eight months. According to defense attorney Virginia Crews, who represents Ahmed, prosecutors moved to dismiss the case after learning that Bullhead City Police detectives may have withheld information from judicial discovery

The defendants were arrested during a Feb. 20 traffic stop by law enforcement agencies including the Bullhead City Police Department, the Mohave Area General Narcotics Task Force, and the Mohave County Sheriff's Office. According to investigators, Beyan and Ahmed were initially stopped for an alleged traffic infraction, and supporting K-9 units detected the presence of drugs in their shipping trailer. Officers allegedly searched the vehicle at the scene without a warrant and found about 370 pounds of cocaine and 220 pounds of methamphetamine concealed inside a shipping container within.

“At a hearing on Thursday, it came to light for the first time that (Bullhead City Police Corporal Thomas Canfield) had prior information about the truck,” Crews said. “There was apparently a plane tracking their truck when it crossed the border, and it seems that the lead detective was already planning to stop the vehicle. There was additional information in his testimony that was never disclosed, that could possibly have helped both defendants.”

A trial date in the case had already been scheduled for Nov. 2. According to a court document filed this week by Crews, Canfield's testimony would have amounted to an “ambush” after it was initially withheld from attorneys.

“This was the state's failing, and they moved to dismiss the case on Thursday,” Crews said. “We didn't oppose.”

According to Crews, both Beyan and Ahmed were professional truck drivers and employed by a Canadian company to transport their cargo to a California warehouse.
Crews said that both men have denied knowledge of any contraband in their trailer prior to entering the U.S.

“The truck and one pallet of cargo was implicated by the evidence,” Crews said. “There has never been any specific information or evidence in the case involving(AhmedorBeyan).”
One day after their arrest, the defendants were released from custody on their own recognizance in a decision made by Lake Havasu Justice of the Peace Jill Davis. Beyan and Ahmed were required to wear GPS ankle monitors to ascertain their whereabouts as they awaited trial. A later court decision required the defendants to pay $10,000 bond in order to leave Arizona, and $75,000 each to return to Canada.