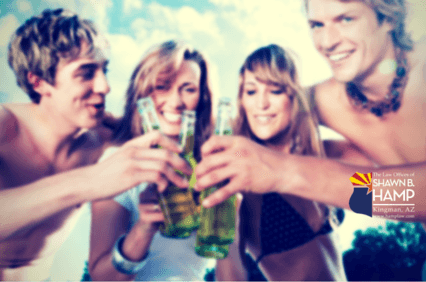 Spring Break is here and is in full swing down in Lake Havasu City.  Ever since the mid-nineties Lake Havasu City, Arizona has been a top spring break destination for college students across the country.

The influx of college students partying in Lake Havasu poses a number of law enforcement challenges for the Lake Havasu City Police Department.

College students can get themselves in a heap of trouble when you combine youth, inexperience, and alcohol or drugs.

A youthful transgression can result in a permanent mistake and a criminal record.

These are the most common ways Lake Havasu City Police Department target and arrest spring breakers.

Many college students consume large amounts of alcohol while on spring break.  Law enforcement in Lake Havasu however regularly target students that appear to be under 21 years of age who are drinking illegally.

It is common for the LHCPD to stop students and ask them their age and request to submit to a portable breath test.  It is questionable whether this type of police contact is legal.

Using a fake id to buy alcohol or get into bars and clubs is also a common offense that law enforcement enforces.

DUI enforcement is always a high priority. If you are underage and commit a DUI, the penalties are more severe with harsher license suspensions.

If you are boating you can be charged with Boating Under the Influence (BUI) if you are impaired by alcohol or have a legal limit above a .08.  Special boating enforcement details often contact boaters if they appear to be drinking.

Warm weather and low inhibition can often tempt some spring breakers to show more skin than allowed by law. Patrol on the beach and water look for individuals who show too much skin.

Indecent Exposure in Arizona includes exposure of the genitals, anus, areola, or nipple in the presence of another person and that person is reckless that a reasonable person would be “offended or alarmed by that act.”

You can be charged with disorderly conduct if you disturb the peace by engaging in fighting, violent or serious disruptive behavior, make unreasonable noise, or use offensive language or gestures to any person with the intent to provoke immediate physical retaliation.  What part of that definition does not describe spring break?

Possession of Marijuana or Drugs is not legal in Arizona unless you have a recommendation from your physician.  Recreational use of marijuana is illegal.  If law enforcement smells marijuana they can search vehicles they reasonably suspect have drugs.

Many officers pose undercover at nightclubs as college students or attractive co-eds that try to “score” illegal drugs like ecstasy.  Merely offering to transfer or give illegal drugs to an undercover officer is a Class 2 Felony.

For spring break college students who are facing criminal charges, hiring an experienced criminal attorney can help minimize the collateral consequences of a criminal arrest. A criminal defense lawyer can often times negotiate with the prosecutor for a diversion or get charges reduced or dismissed. If necessary a lawyer can defend the charges in court or trial if necessary.