5 Facts You Didn’t Know About Marijuana Laws In Arizona 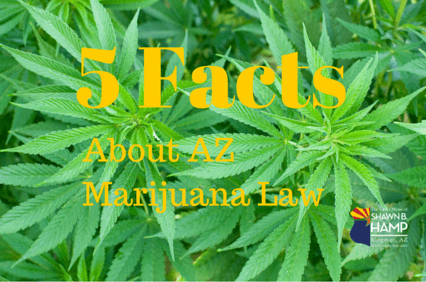 Marijuana Laws That Can Impact You If Arrested For Personal Possession.

Arizona is part of a growing list of states that decriminalized Marijuana in the past few years. Arizona approved the Medical Marijuana Act in 2010 by referendum allowing qualified patients to use medical marijuana for debilitating conditions. In 2016 it is anticipated that voters will go again to the polls to decide if Marijuana will be legalized for recreational use.

Despite the nationwide trend and momentum in Arizona to decriminalize marijuana use, personal possession of marijuana remains illegal in the state.  Law enforcement continues to prioritize profiling and prosecuting users of marijuana.  With this in mind, there are 5 facts about marijuana laws you should know about in Arizona.

There were exceptions for violent offenders, and the legislature later went back and criminalized methamphetamine users but Prop 200 was one of the hallmark pieces of legislation in Arizona that reduced penalties for possession of marijuana.

Even though most Marijuana offenders get cited and released if they are charged with misdemeanors, an offender can still be arrested for personal possession of marijuana and be held in jail until release conditions are set by a judge.  But a first time offender can never be sentenced to jail for a first time offense.

Because of the reduced penalties for personal possession of marijuana prosecutions became less frequent and less severe.  Diversions became much more common and prosecutions used more discretion in prosecuting marijuana cases which brings us to the next fact . . .

2.  Possession of Marijuana Can Be Charged As A Felony Or A Misdemeanor.

Personal possession of marijuana (less than 2lbs) is a Class 6 Felony under A.R.S. 13-3405.  While a Class 6 Felony is the least severe class of felony, it is nevertheless a criminal conviction that could have severe collateral consequences.

Because of the previously mentioned Prop 200 laws that severely restricted the penalties for personal possession many prosecuting agencies exercise their discretion in how they charge marijuana offenses.

Under A.R.S. 13-604 Judges or prosecutor have the discretion to designate class 6 Felony offenses as felonies or misdemeanors.  It is not uncommon for many prosecuting agencies, including the Mohave County Attorney's Office to therefore charge personal possession of marijuana cases as a Class 1 Misdemeanor instead of a felony.  Under direction by local prosecutors law enforcement may also charge such offenses as misdemeanors.

Not all prosecuting agencies are the same.  Designation of a marijuana offense as a felony or a misdemeanor may vary from county to county.

If you are arrested for personal possession of marijuana, you may not be facing jail time, but there are some mandatory sentencing provisions you could face.

If convicted of personal possession of marijuana charge, you could face a mandatory fine of $750 or three times the street value of any drug (whichever is greater) plus a 83% surcharge.  At a minimum you could be fined $1,372.50 (a class 1 misdemeanor is $2,500 without surcharges).

If convicted of a felony personal possession of marijuana charge a person on probation must be ordered to perform 25 hours of community work service with a drug rehabilitation or treatment facility. 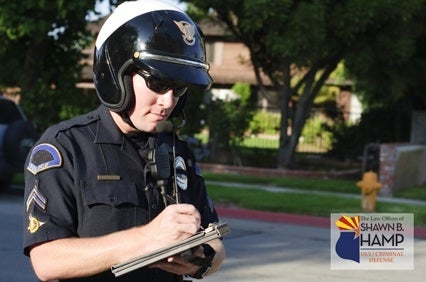 In some Arizona counties, personal possession of marijuana may be cited by police as a class 1 misdemeanor offense.

If you are convicted of a misdemeanor personal possession of marijuana charge a person on probation must be ordered to complete 8 hours of “instruction on the nature and harmful effects of narcotic drugs” or must be ordered to perform 25 hours of community work service. A.R.S. 13-3405(H).

In many marijuana criminal cases the prosecution may offer to have a defendant plea guilty to possession of drug paraphernalia in exchange for dismissing a possession of marijuana charge.  Such a reduction could avoid the mandatory minimum fines and community work service.  It could also avoid some of the collateral consequences discussed in the next fact.

4.  A Personal Marijuana Conviction Can Have Collateral Consequence For Employment or School.

If you are convicted of any drug offense, you may be ineligible for federal financial aid or pell grants.  This includes possession of marijuana offenses.

Your eligibility for student loans and pell grants might be suspended if a drug offense occurred while you were receiving federal student aid (grants, loans, or work-study).

If you are convicted of a drug-related offense after you submit an application for financial aid, you might lose eligibility for federal student aid, and you might be liable for returning any financial aid you received during a period of ineligibility. The Office of Federal Student Aid – U.S. Department of Education.

Being convicted of a drug offense like possession of marijuana could make you ineligible for many occupations in Arizona that require fingerprint clearance under A.R.S. 41-1758.03.  Occupations like teachers, nurses, day care workers, or real estate brokers can loose their professional license for a marijuana offense.  Unless you obtain a special waiver or get your conviction set aside you will continue to be ineligible for employment for this security type clearance occupations.

5.  Medical Marijuana Is An Absolute Defense, But Not After The Fact.

A qualifying patient under the Arizona Medical Marijuana Act is a person who has been diagnosed by a physician as having a debilitating condition. A visiting qualifying patient is a non-resident of Arizona or someone who has resided in Arizona less than thirty days.

Sometimes getting a medical marijuana card might be a mitigating fact at sentencing, but it is not a defense or a legal reason for the charges to be dismissed in a criminal prosecution.