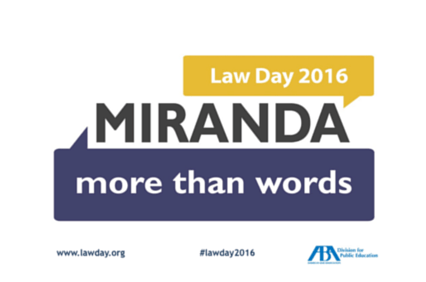 Little Known Facts About Your Rights Under the 5th and 6th Amendment.

Miranda Rights are usually given as follows:

If the legal warning is not given prior to In-Custody Interrogation, then all subsequent statements are precluded and are not admissible at trial.

Miranda Warnings have become a “bright line” rule for police agencies everywhere when conducting suspect interrogations. Despite its commonplace, there are many misconceptions about when Miranda warnings apply and what results occur if they are or not read.

The reality of the matter is that the police don't always interrogate suspects after they are taken into custody.

The police may already have enough “probable cause”, information, or evidence to arrest a suspect. If there is enough evidence to secure a conviction, the investigation may be concluded and may not be needed to interrogate a suspect at all whether they are in or out of custody.

2.  Violation of Miranda Does Not Automatically Dismiss A Case.

Even the original Ernesto Miranda did not have his case dismissed after the Supreme Court victory. Miranda's confession was tossed out but he was later placed on a subsequent trial. At retrial the prosecution later brought in additional witnesses and convicted Miranda for the original rape charges he was arrested for.

If a police investigation has enough independent evidence without the illegal confession, a prosecution and a trial could still go forward.

3.  Only Apply To In-Custody Interrogations.

The Supreme Court made their decision in Miranda v. Arizona because of the inherently coercive nature of police interrogations that existed at the time. Police often used psychological and sometimes physical pressure when questioning suspects. This was commonly referred to as getting “the third degree”.

The ruling had nothing to do with police interrogations where a suspect was not in custody. It was in custody interrogations that concerned the Court enough to create a bright line rule on when statements are admissible or inadmissible.

Many police interrogations occur when a suspect is not in custody, and have not yet been placed under arrest. A suspect could be questioned at the side of the road during a DUI investigation before they are arrested. Domestic violence suspects are usually questioned at the scene of the domestic dispute, not at the police station or before they are placed into custody.

Whether a suspect is in custody or is out of custody is a determination that a court would make at any hearing to determine the admissibility of a confession as a result of a Miranda violation.

4.  Police must stop questioning you if you ask for a lawyer

Miranda Warnings not only safe guards a suspect's 5th Amendment Right to Remain Silent, is also protects the 6th Amendment Right To Counsel. As a result, if police do no provide a lawyer during an interrogation or provide access to an attorney, any confession is inadmissible if a suspect requests an attorney be present.

If a suspect is in custody and they have been advised of their Miranda Rights, a police officer can still use almost every trick in the book to coerce a confession from a suspect. Even if a suspect states that they wish to assert their 5th Amendment right to remain silent, a police officer may still persist to interrogate and question a witness.

If a suspect requests to have an attorney, the police must honor that request and conduct no further interrogation until a lawyer is provided. In most if not every case, police agencies do not provide lawyers or public defenders to interrogations, and therefore all questioning is stopped.

Miranda Warnings given to protect against coercive police interrogation. They don't apply if a suspect makes a statement that is NOT in response to questioning by police.

It is a very stressful situation when a suspect is placed under arrest. It is not uncommon for a suspect to make statements while being handcuffed or being placed in the back of a squad car when no questioning has occurred.