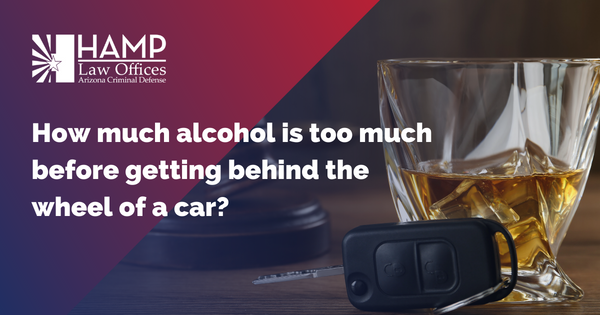 The big question is; how much alcohol is too much alcohol before getting behind the wheel of a car and risking drunk driving charges or worse?

This chart can show you your estimated BAC levels based on the number of drinks you have consumed:

In summary, one drink is about 1 x 12-ounce bottle of beer or 5 ounces of table wine.

For example, if you are a 180lb man who has consumed 8 drinks in 4 hours, you would say 0.167% minus 0.60% resulting in a BAC of 0.107%. This would mean that you are intoxicated and it would be illegal for you to drive. Even if you do not feel intoxicated as you have a higher tolerance for alcohol, this reading will still make it illegal to drive.

Every state has its own law and legal limits for you to drive. If you are over the state's limits, this would be considered a DUI per se, meaning you are presumed too intoxicated to drive. In Arizona, the legal limit for alcohol is .08%. Anything above that reading is considered “per se” illegal in Arizona.

Being below the legal limit can still get you charged with a drunk driving offense. In order to prove your innocence a BAC test (blood, breath, or urine test) will need to be done as well as a Standardized Field Sobriety Test. The prosecution will use these test results as corroboration of proof of impairment along with an assessment of your demeanor (slurred speech, watery bloodshot eyes, etc).

If your blood results put your alcohol levels above the legal limit, a field sobriety test and assessment of your demeanor may not be needed to prove you guilty of a DUI as this alone may be enough evidence to prosecute you. The BAC level will speak for itself, “per se” and will be sufficient evidence to lay a DUI charge against you.

Using the above chart will help you determine roughly when to stop drinking alcohol before getting behind for a while. However, because the chart is based on estimates, it would be better to rather be safe and consume less alcohol than the chart suggests, or wait a longer period of time before getting behind the wheel of a car.  A DUI per se offense is a very serious offense and taking these precautions would be in your best interest.

Here in Arizona, the legal BAC limit is 0,08%. You can be charged with a DUI for being presumptively over the limit.

The state of Arizona also has a zero-tolerance policy for certain persons such as minors or commercial bus or truck drivers meaning that levels even below a .08% can be criminalized.

A reading even much higher than .08% could mean even more serious consequences for you.

An Extreme DUI or a Super Extreme DUI charge can lead to more severe consequences such as larger fines, a longer license suspension or revocation, an interlock device to be installed on your car and kept there for a longer period of time, incarceration, and longer periods of probation.

In Arizona, an Extreme DUI will leave you with a minimum $2,500 fine and 30 days in jail and up to five years of probation. A Super Extreme requires a $3,250 fine and 45 days in jail. This is required even just for a first offense.

There are defenses that may be applicable when contending a drunk driving charge.

Sometimes, there is a disconnect between the actual amounts of drink consumed and the levels tested and the results. There may also be no evidence of actual impairment which might cast doubt on the reliability of the field sobriety tests or breathalyzer tests performed on the subject.

A good defense attorney will consider if the evidence was obtained legally (if the police stopped you unlawfully or went against your constitutional rights, the evidence will not be admissible to charge you with a DUI per se).

This is why it is important to hire an experienced defense attorney to help you with your DUI case as they will know all the laws pertaining to DUI offenses, as well as all the possible defenses. If you have received a DUI, it is imperative that you contact an experienced DUI attorney as soon as possible.

At Hamp Law Offices, we are a team of highly experienced and very professional DUI attorneys. Contact us today so that we can fight for the best possible outcomes for your case. 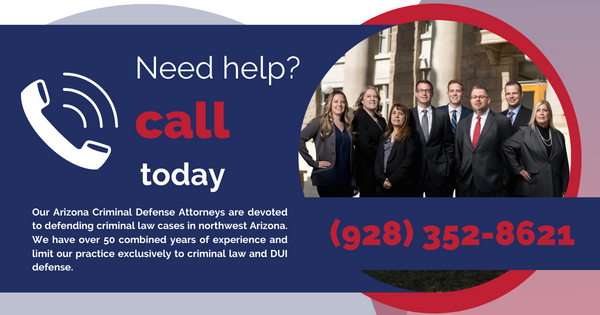