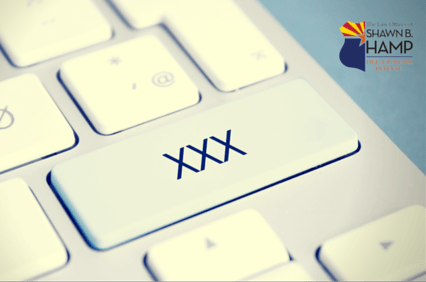 The law amends the previous statute A.R.S. 13-1425.  It makes it a felony to send images of another person in the state of nudity or other sexual act with the intent to harm, harass, intimidate, threaten or coerce.

The person in the image must have had a reasonable expectation of privacy that the images were private.

Arizona enacted a similar law in 2014 that was struck down as unconstitutional by a Federal Court Judge.

The judge ruled that the first law was too broad and vague and would criminalize legitimate artist and photographers.

The previous law made it illegal to disclose images of another person without their consent of disclosure.

The new law requires the prosecution to also prove “Intent to Harm” and that the person in the pictures had an expectation of privacy.

The changes should prevent any legal challenges to the new law.

A.  It is unlawful FOR A PERSON to intentionally disclose AN IMAGE of another person WHO IS IDENTIFIABLE FROM THE IMAGE ITSELF OR FROM INFORMATION DISPLAYED IN CONNECTION WITH THE IMAGE IF ALL OF THE FOLLOWING APPLY:

1.  THE PERSON IN THE IMAGE IS DEPICTED IN A STATE OF NUDITY OR IS ENGAGED IN SPECIFIC SEXUAL ACTIVITIES.

3.  THE IMAGE IS DISCLOSED WITH THE INTENT TO HARM, HARASS, INTIMIDATE, THREATEN OR COERCE THE DEPICTED PERSON.

B.  This section does not apply to any of the following:

1.  THE REPORTING OF UNLAWFUL CONDUCT.

3.  Images involving voluntary exposure in a public or commercial setting.

5.  ANY DISCLOSURE THAT IS MADE WITH THE CONSENT OF THE PERSON WHO IS DEPICTED IN THE IMAGE.

1.  Class 4 felony if the IMAGE IS DISCLOSED BY ELECTRONIC MEANS.

2.  CLASS 1 MISDEMEANOR IF A PERSON THREATENS TO DISCLOSE BUT DOES NOT DISCLOSE AN IMAGE THAT IF DISCLOSED WOULD BE A VIOLATION OF THIS SECTION.

D.  For the purposes of this section

2.  “DISCLOSED BY ELECTRONIC MEANS” MEANS DELIVERY TO AN E‑MAIL ADDRESS, MOBILE DEVICE, TABLET OR OTHER ELECTRONIC DEVICE AND INCLUDES DISCLOSURE ON A WEBSITE.

Changes to the law are in CAPS.