Arizona took the Sting Out of a Federally Sponsored Surveillance Device 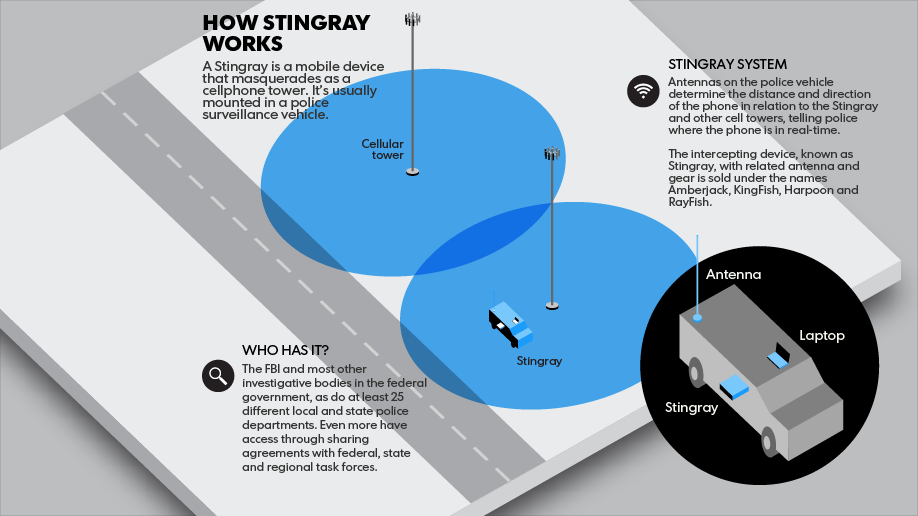 Drugs are a serious problem in Mohave County, Arizona. We are well into the second half of 2017, and since January of this year, drug raids and arrests have been staggering, particularly in Kingman, Bullhead City and Golden Valley. These drug busts have involved a great deal of surveillance to make them successful. Unknown to most of you, however, is the use of what's known as 'the stingray'.

Stingrays are cell tower simulators used to trick a device within its range to connect to the stingray rather than a tower. When this happens, law enforcement can then (1) sweep up communication content; and (2) track and locate a person in possession of a specific phone or other electronic device. These devices are used often to surveil suspected drug producers, traffickers, and dealers. In effect, what they do is allow law enforcement to spy on people, regardless if a suspect to a crime or not, without having to provide probable cause and/or obtain a warrant.

What they also do: invade privacy. Whether it's the suspect's privacy or someone else's privacy, the devices have great capabilities to capture a lot of communications content on anyone within range of the device. To invade someone personal electronic communications without a warrant is what some might say is unconstitutional. Earlier this year, Arizona legislature concurred and subsequently passed SB1342, Search Warrants; Tracking; Simulator Devices. On August 9, 2017, Gov. Doug Ducey signed the bill into law.

The law requires police to obtain a search warrant based on probable cause before deploying a stingray to locate or track an electronic device. If law enforcement wants to use a stingray to intercept, obtain or access the content of any stored oral, wire or electronic communication, then it must also obtain a warrant under existing wiretapping statutes. This new warrant requirement will impact the federal surveillance program designed to benefit from local and state law enforcement use of the stingray devices. As it is, some watchdog organizations claim with strong arguments that the communication content acquired by these devices are stored in a central database system that the federal government can then access for its own purposes.

The federal government funds most state and local stingray programs, but for these local and state agencies to benefit from the program, they must sign non-diclosure agreements. These agreements can prevent prosecutors and defense attorneys alike from gaining access to the program when attempting to prosecute or defend a person who is both a suspect and subject of the stingray program. Furthermore, with these non-disclosure agreements in place, law enforcement agencies who are party to the agreements are less likely to release any information on the use of the stingrays. There has been a cloud of secrecy over the program for some time now, and the Arizona legislature and Gov. Ducey just disintegrated that cloud.

According to what the American Civil Liberties Union has uncovered in an investigation on the stingray program, almost half of all states in the U.S. have either local or state law enforcement agencies involved in the program or both. According to the same report, Arizona local police have been involved, but there is no indication of state police involvement. Now, however, the local police using the stingray devices will no longer be able to use them unless they do the right thing: obtain a proper warrant. You still have your 4th Amendment right to privacy against unreasonable searches. This new law is a sting in law enforcement's efforts to skirt around the warrant issue; now they have to follow the law as the Constitution meant it to be followed.

These cases can be litigated in Court even though they do prove to be difficult and challenging. Part of the reason is that local prosecutors go to great lengths to conceal the use of Federal Surveillance used to gather evidence in state crimes. Defense attorneys must file and push for Motions for Discovery in these type of cases when they suspect this type of hidden evidence. Ultimately a defendant has a right to know what evidence was gathered to give law enforcement probable cause to search.

Thank you for your comment. I appreciate you visiting our site and reading what we have to say.

I have helped thousands of people and clients in my 18 year career as an attorney. Folks are invited to inquire with and contact me at anytime. We try to help as many as possible.