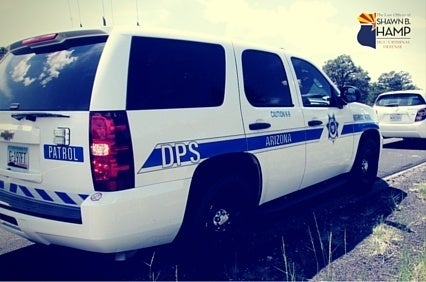 In 2010 Arizona passed the medical marijuana act to legalize medical marijuana for qualifying patients.  Despite Marijuana's partial legalization in Arizona and across the country, the Arizona Department of Public Safety (AZ DPS) continues to make it a high priority to target “drug traffickers” of marijuana in Northern Arizona and throughout the entire state.

It is not clear whether the AZ DPS actively encourages its officers to conduct drug interdiction arrests or whether individual officers take it upon themselves to actively target “drug smugglers”.  Nevertheless it remains a priority for highway patrol officers to conduct drug arrest and publicize its drug interdiction efforts. It is not uncommon for AZ DPS highway patrol to profile out of state drivers who travel on on Interstate 40 (I-40) to make possession of marijuana arrests.

I-40 is a High Drug Trafficking Corridor

Interstate 40 is a high traffic east-west corridor that crosses Northern Arizona.  Interstate 40 runs through Kingman, Flagstaff, and Winslow, Arizona with many travelers going to and from California. Many narcotic officers recognize California as being a large source for the exportation of high grade quality marijuana.

For a variety of reasons, mile post 50-52 along Interstate 40 in Kingman, Arizona is the most frequent interdiction point for Marijuana arrest in Mohave County. Kingman is the county seat for Mohave County.  AZ DPS and the Mohave County Sheriff's Office have their headquarters for “District 1” located in Kingman. The Mohave County Jail and Detention Facility is located there as well. It is by far the most convenient location for the highway patrol to target and conduct marijuana possession arrest.

While every patrol officer wants to make the next big drug bust, most drivers only get cited for small amounts of simple possession of marijuana and drug paraphernalia charges instead.  Whether its a simple possession or possession with intent to sell, the drug stop and arrest typically play out the same.

A police officer only needs “reasonable suspicion” that a traffic violation has occurred to legally justify a traffic stop. The officer waits for any plausible traffic offense to get committed or looks for a minor equipment violation and then does a traffic stop.

In these type of traffic stops it is typical for officer to cite obscure violations to justify the stop.  “Cracked Windshield”, “Following too Closely”, “Driving too Slowly”.  A speeding violation might be made based on a visual estimation, or within 5mph of the speed limit. 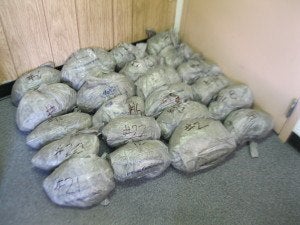 A large amount of marijuana seized by AZ DPS during an I-40 Drug interdiction task force assignment in 2015 (source: AZ DPS)

An officer can legally make a traffic stop even if there reasons for doing so or pretext is to search for illegal drugs.

The government has the burden to prove that any search or seizure conducted without a warrant was lawful and constitutional.  The government must prove that the there was no unreasonable search and seizure for the stop to be conducted.

Disputing the validity for for these traffic stops can still be difficult.  Challenging the reasons for the stop may involve conducting pretrial litigation to interview officers and get the recordings of any dash cams used during the traffic stop.  Litigating the legality of the traffic stop may be the most critical step in defending these type of drug cases.

Illegal Search and Seizure Can Lead to Illegal Marijuana Arrests

It is not just the stop that must be challenged, but also any unreasonable seizure or delay in searching the vehicles for drugs that may be at issue that lead to the arrest.  The government must not only prove that the stop was lawful but also the subsequent arrest.

The goal of a highway patrol officer doing a drug interdiction is to stop and search every “suspect” vehicle they come in contact with.  Officers must then have a legal reason to justify a search of the vehicle and justify the arrest.  Officers will often report smelling the order of marijuana to justify a search.  An officer may ask for consent to search a vehicle even if they don't smell any marijuana at all.  If a suspect denies consent, an officer may attempt to detain a driver long enough for a drug dog to sniff the suspect vehicle to detect drugs.

The officer cannot detain a suspect no more than is necessary to effectuate the purpose of the original stop.  If an officer pulls a suspect over for a speeding violation or an equipment violation the officer must only keep the driver pulled over as long as necessary to issue the traffic ticket or warning.

In reality police officers will prolong the investigation to find a legal justification to search the vehicle.  Officers will ask excessive questions (“Where are you going?”, “Where are you coming from?” to obtain responses they deem as inconsistent or incriminating and use this as justification or probable cause to arrest an individual and make a search.

An officer may ask for consent to search vehicles they suspect of transporting drugs. A suspect who lawfully refuses consent will most likely not be informed that they have a right to leave or at worse may be intimidated or order to not leave and wait to have a drug dog called out to sniff the vehicle for drugs. Courts have ruled that some of these detentions can be unreasonable and a suppression of the evidence may be the remedy for an unreasonable delay.

An experienced lawyer will always review a drug case for any 4th Amendment Search and Seizure Issues that inevitably present themselves in drug cases.

Marijuana Drug Penalties Can Be Severe

Transporting or Possession Marijuana for sale can result in a felony conviction.  If the amount of marijuana is over two pounds it can increase the penalty to a class 2 Felony in Arizona, and requires mandatory prison between 3 to 12.5 years.  A court must also impose a mandatory fine that is three times the value of the drugs seized (which could easily be in the thousands of dollars).

Just possessing Marijuana for personal use or simple possession has a mandatory fine of no less than $1,300 with enhancements.  There is mandatory community work service or drug education classes if convicted.  A conviction for any drug offense could make them ineligible for student financial aid.  If they are not a citizen of the United States is could jeopardize their immigration status or make them ineligible for citizenship.

Hiring an experienced criminal lawyer can be the difference between getting a mandatory sentence or getting the charges reduced or dismissed.  It is always best to consult with an attorney if you are ever facing these type of marijuana charges.