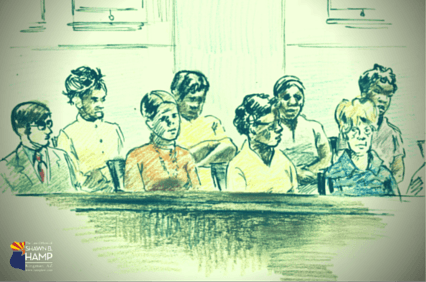 The Differences Between A Criminal Trial By Judge Or A Trial By A Jury.

In criminal cases there are two types of trials. There are jury trials and there are bench trials.

A bench trial is a proceeding in which a judge determines the guilt or innocence of a defendant.  A jury trial consist of several men and women or “peers” in the community that are presented with evidence during a trial and then must deliberate and return a vote of innocence or guilty.

When Do I Have A Right To A Jury Trial?

A defendant has a right to a Jury Trial in ALL Felony Cases and only in certain limited Misdemeanor Cases as a right under common law or by statute.

Felony Cases are serious crimes in which a conviction may result in a possible prison sentence. Some felony offenses include homicide, aggravated assault, drug charges, burglary and serious thefts.

Misdemeanor Cases are less serious crimes that may result in a short jail sentence and possible fines. Some misdemeanor crimes include DUI, shoplifting, disorderly conduct and domestic violence.

A defendant has a right to jury trial in only some Misdemeanor Cases.  Jury Trials in DUI cases are protected by statute. Other crimes such as theft are guaranteed under “common law”.  “Common Law” are laws that derive from judicial or legal precedent rather than legislative statutes.

Rule 18.1. Trial by jury
a. By Jury. The number of jurors required to try a case and render a verdict shall be as provided by law.
b. Waiver. The defendant may waive the right to trial by jury with consent of the prosecution and the court. In a capital case, the defendant may also waive the right to have a jury determine aggravation or the penalty if the prosecution and the court concur.
(1) Voluntariness. Before accepting a waiver the court shall address the defendant personally, advise the defendant of the right to a jury trial and ascertain that the waiver is knowing, voluntary, and intelligent.
(2) Form of Waiver. A waiver of jury trial under this rule shall be made in writing or in open court on the record.
(3) Withdrawal of Waiver. With the permission of the court, the defendant may withdraw the waiver of jury trial or sentencing but no withdrawal shall be permitted after the court begins taking evidence.
Rule 18.1 Arizona Rules of Criminal Procedure

How Many Jurors Are In A Jury Trial?

The number of jurors in a jury trial vary depending on the severity of the charges.

In a Misdemeanor Cases there are (6) six members of the jury.

In Felony Cases there are (8) eight members of the jury.  Unless the defendant is facing over twenty five years in prison or a death sentence then the defendant has a right to a (12) twelve person jury (think “Twelve Angry Men”).

Rule 18.2. Additional jurors
The court may in its discretion qualify such additional jurors as it deems necessary. All jurors shall be deemed regular jurors until alternates are designated pursuant to Rule 18.5(h).
Rule 18.2 Arizona Rules of Criminal Procedure

What Is The Difference Between A Bench Trial And A Jury Trial?

The order of proceedings between a bench trial and a jury trial is almost identical.  There are opening statements, a presentation of evidence by the prosecutor and then the defense, rebuttal testimony, and then closing arguments.

The key difference is that a judge will decide the guilt or innocence of the defendant at the end of the trial.  Instead of a jury deliberating and voting on guilt or innocence, the judge makes that determination.

In a jury trial, the judge must instruct the jury on the law that they will use to determine innocence or guilt.  These are called jury instructions.  In a bench trial the judge does not have to give any instructions because they already know the law to decide the case.

A jury could take a long time to reach its verdict during deliberations.  A judge who is taking notes throughout a trial does not need to deliberate with anyone else and they may give a verdict as soon as the trial concludes or might make his or her decision after a short recess.

What Is The Role Of A Judge In A Non-Jury Trial?

This role of determining admissibility of evidence is more critically important in a jury trial, because the judge also serves the function of a “gate keeper” as to what evidence the jury will hear or consider.  A judge may do this by determining issues of admissibility of evidence outside the presence of the jury, or may tell the jury specifically during the presentation of evidence to not consider testimony given, or “strike” testimony from the record during the trial.

As mentioned previously, the judge at the beginning and at the conclusion of closing arguments will instruct the jury on what law they will use to decide the case and deliberate at the end of the trial.

How big of a difference does an all-white jury make? A leading expert explains. https://t.co/3ZBm8Qvkma by @janellross #deathpenalty #Foster

What Is Better, Trial By A Judge Or Jury?

The general rule in criminal cases is that it is almost always better to have a jury trial.

It is usually harder for a prosecutor or the government to convince multiple people on a jury about the guilt of a defendant beyond a reasonable doubt.  It is not good enough to convince a majority of jurors, in a criminal matter, a prosecutor has to convince all members of the jury to return a unanimous verdict of guilt.

In some cases it may still be advisable to elect to have a bench trial before the judge.  This may occur if the issues in the case are highly technical or purely “legal” in nature.  There may be evidence that is highly prejudicial if presented to a jury.  These are very narrow exceptions, and it is best to make that decision with the advice of an experienced criminal attorney.