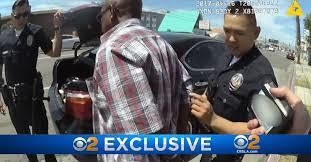 For the first time since they started using body cameras two years ago, police footage from the Los Angeles Police Department (LAPD) has been released to the public. It appears to show cops framing a suspect for drug possession by planting a bag of cocaine on him during an arrest for hit-and-run. At the very least, the footage shows that police lied in their police report.

Back in April, police in California responded to a hit-and-run, and ended up arresting 52-year-old Ronald Shields. They found an unlicensed gun in the back of the car when they searched it and, according to the police report that a dozen officers on the scene filed, they also found a baggie of cocaine in Mr. Shields' front left pocket.

But when the case went to trial and the officers stuck with the story that they'd written on their police report, Shields' criminal defense attorney proved that they were lying by showing the body camera footage from the arrest.

The body cameras worn by the LAPD have a unique function: They capture silent video, even when they're off. When the officer manually turns the camera on, the device starts capturing both video and audio, but also automatically saves the silent video from the preceding 30 seconds, to provide context to the upcoming footage.

The officers at the scene of Mr. Shields' arrest, however, seemed to have forgotten this aspect of the cameras they were wearing, because one officer films himself finding drugs not in Mr. Shields' front left pocket, but on the street. He then moves the drugs from the street into Mr. Shields' wallet. Then he turns on his body camera, “discovers” the drugs, and tells his superior officers.

While this might be harmless – the drugs might have fallen out of Mr. Shields' pocket during a scuffle from earlier in the arrest, and the footage shows the cops reenacting an earlier discovery – it still ruins the credibility of the officers. However, Mr. Shields' defense attorney claims it also shows the officers actually planting the drugs on his client.

Footage Might Show Police Planting Evidence of a Drug Crime

Police planting evidence on a suspect and getting caught with their own body cameras is nothing new – the Baltimore police department is going through a similar fiasco, which could impact dozens of cases.

These incidents show how willing police are to lie and to frame suspects for crimes they may not have committed. The best way to catch them is to have a solid criminal defense attorney at your side throughout the process. Call the law office of Shawn Hamp if you've been charged with a crime at 866-490-HAMP or contact him online.