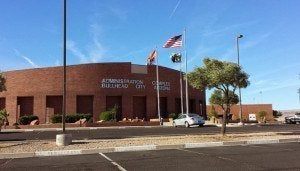 Bullhead City Justice Court:  The Bullhead City Justice Court is located at 2225 Trane Road in Bullhead City, Arizona 86442 and is housed in the Bullhead Mohave County Justice Facility.  It is a court of limited jurisdiction which handles civil traffic, small claims cases, orders of protection, and all misdemeanor cases.  Felony proceedings can be initiated in the justice court and scheduled for preliminary hearing prior to being transferred to the Superior Court.  Misdemeanor cases (DUI, Domestic Violence, Petty Theft) generally consist of infractions or violations that occur outside the city limits in the unincorporated areas of Mohave County (Ft. Mohave, Topock, Golden Shores, Mohave Valley).  Criminal cases are prosecuted by the Mohave County Attorney's Office.

U.S. District Court of Arizona:  The U.S. District Court of Arizona has several locations in Arizona.  Federal cases that occur in Bullhead City are usually heard in the circuit court at the Mohave County Superior Court (Courtroom E) 401 Spring St. Kingman, AZ. The circuit court usually hears offenses that consist of misdemeanor infractions (OUI, operating a boat under the influence) that occur on Federal Land including the Lake Mead National Recreation area north of Bullhead City. Criminal cases are prosecuted by the United State's Attorney's Office, District of Arizona.

Shawn Hamp is licensed to practice in all state courts of Arizona and the United States District Court of Arizona.  If you have a criminal infraction that occurred in Bullhead City or its outlining areas please contact our offices today.