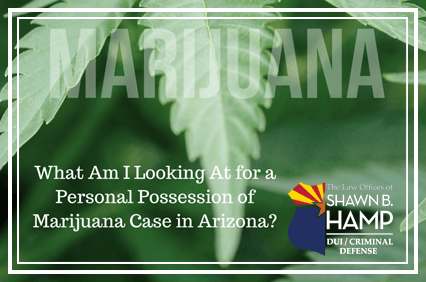 If you have been charged with a minor drug offense you probably have heard court personnel, judges, or lawyers referring to your criminal matter as a “Prop 200” case.  The issue usually comes up when the court has to make a determination if any jail time should be imposed for a first time drug offense.  If you are “Prop 200” eligible, then the likelihood of you being incarcerated has been minimized or reduced.  You might be wondering to yourself “What is ‘Prop 200' anyway?”

Proposition 200 refers to the voter referendum approved by the voters of Arizona back in 1996.  The purpose of the law was to offer treatment to drug users and guarantee probation for first time and second time offenders without facing the possibility of prison.  With the exception of some individuals with prior violent offenses, first time drug offenders would not the face the possibility of prison or jail time for a conviction.  The voter approved law was codified as A.R.S. 13-901.01.

Prior to A.R.S. 13-901.01 an individual charged with a personal possession drug offense could face the possibility of prison time without the opportunity of probation and rehabilitation services.  After the law, an individual charged with a first time personal possession of drugs case would not face any prison time, and would not even face any jail time.  Second time offenders would also be guaranteed probation and no prison time, but could still face some jail time as a condition of probation.  This guarantee would remain even if the individual violated probation.

The law changed the mandate of drug prosecutions by focusing on the drug suppliers and dealers and less on the users of illegal drugs.  While possession of marijuana, methamphetamine, and narcotic drugs remained as felonies.  Prosecutors and law enforcement exercised more discretion in charging and plea bargaining most offenses as misdemeanor offenses.  In effect decriminalizing personal possession drug cases.  It is not uncommon today for first time drug offenders to have their case charged or resolved as a misdemeanor offense in justice or municipal court.

The law did not go into effect without some backlash.  Due to the ongoing epidemic of methamphetamine use, judges and prosecutors became increasingly frustrated with the inability to impose any serious consequences or sanctions for individuals that violated probation for their drug infractions.  Due to the highly addictive nature of methamphetamine, drug treatment programs appeared ineffective in modifying behavioral change for users of meth.  Arizona voters approved Prop 301 2006 by making methamphetamine offenses ineligible for the automatic probation sentencing of A.R.S. 901.01 and allowing jail time and prison for meth infractions.  Personal Marijuana possession cases are still eligible for automatic probation under “Prop 200”.

Prop. 200 changed the landscape of drug prosecutions in Arizona forever.  While penalties for personal drug offenses remain stringent (with mandatory fines, community restitution, and drug counseling), jail time remains a last resort for most non-methamphetamine offenders.  Most first time offenders are given an opportunity for rehabilitation before ever facing the possibility of a prison sentence.