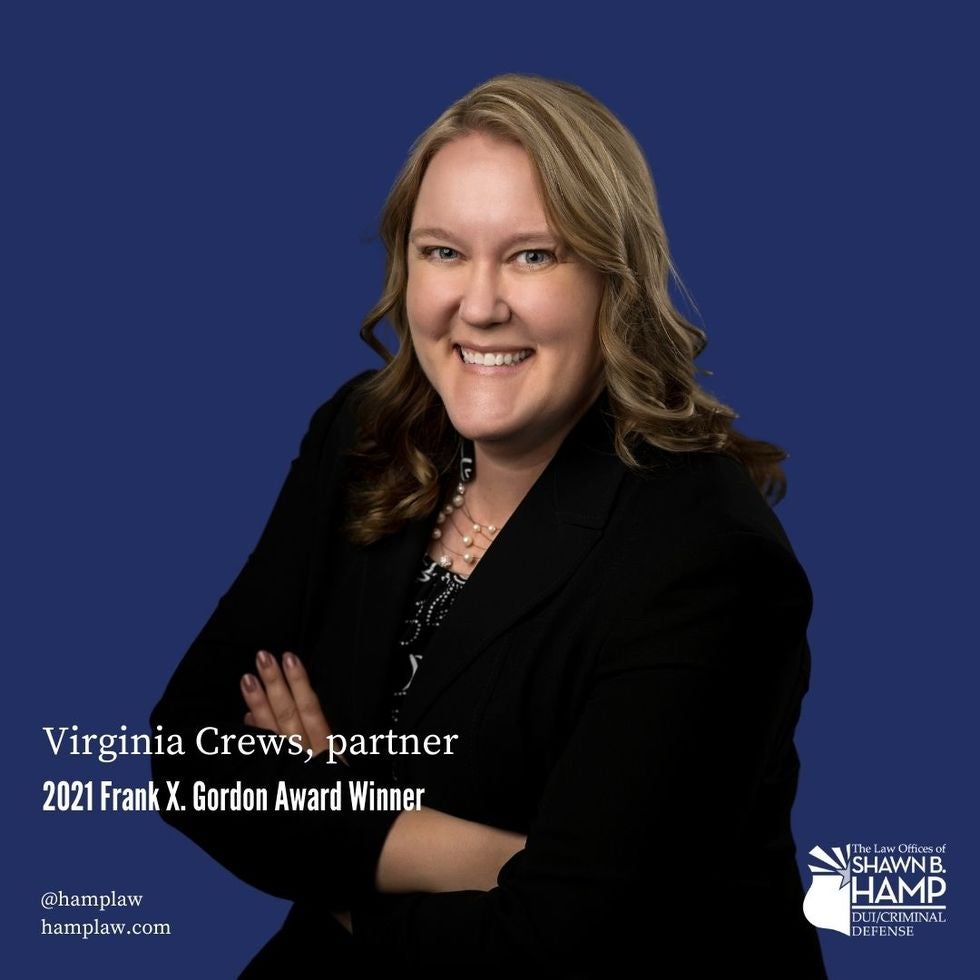 The Law Offices of Shawn B. Hamp, P.C. is proud to announce that partner Virginia Crews has been selected by the Mohave County Bar Association to be the recipient of the 2001 Frank X. Gordon award.

He was an associate with the law firm of Gordon and Gordon in Kingman, Arizona from 1954 to 1962, and became a judge of the Superior Court of Mohave County in 1962. He served in that office until his appointment to the Arizona Supreme Court in 1975.  In 1990, Gordon received an American Bar Association Pro Bono Publico Award for his efforts on behalf of the poor through his stewardship of the Volunteer Lawyers Program of Phoenix

The Frank X. Gordon Award is given for outstanding achievement in the area of the practice of law. The Board of Directors of the Mohave County Bar Association carefully examines nominated candidates each year to determine if a suitable candidate for the award exists. The Board has chosen to give the award to Ms. Crews.

The criteria the award includes:

The award was presented on September 24th at the annual meeting of the Mohave County Bar association.

Virginia is an accomplished and very well-respected trial attorney in Mohave County having litigated a wide variety of issues and cases in Mohave County's Superior and Limited Jurisdiction Courts as well as the courts of the United States District Court of Arizona.  Those cases have involved advocating for clients facing charges ranging from First Degree Murder, Aggravated Assault, Transportation and/or Sale of Drugs, Aggravated DUI, etc. in the Superior Court to misdemeanor DUI and other offenses in the Limited Jurisdiction Courts.  Virginia has shown her commitment to her clients without consideration as to whether the client is indigent or has retained her services.

Virginia's devotion to the practice of law in Mohave County is not limited to the handling of cases for her clients.  She is a current member of the State Bar of Arizona's Criminal Practice & Procedure Committee.  Her goal in serving on the committee is to be a voice for those practicing law in Mohave County on recommendations to be made to the Arizona Supreme Court regarding rules and procedures that will have an impact on how cases proceed through the courts and to ensure that justice is promoted throughout the entire process.

Virginia's conduct in handling and litigating cases through the various courts has shown her to be of exceptional moral character as well as her commitment to the ethical practice of law.  Her reputation amongst her adversaries and with the courts speaks for itself.  To have a better understanding of all aspects the court process, she served as a Justice of the Peace, pro tem, from 2013 to 2019.

Virginia is a graduate of the University of Arizona having received a Bachelor of Science Degree in 1998.  In 2004, she received her Juris Doctorate Degree from the University of Dayton School of Law in Ohio.  She practiced law from 2004-2009 in Ohio and moved to Bullhead City in 2009 after passing the State Bar of Arizona Exam in 2008.  After moving to Bullhead City, she began practicing criminal defense and areas of civil law, including domestic relations.  She continued in that practice until 2015 when she joined the Law Office of Shawn B. Hamp as Senior Trial Counsel with a focus on handling serious felony offenses.  Since joining the firm, she has been an integral factor in the firm's growth to five practicing attorneys in Mohave County and across the State of Arizona.

Virginia's practice is not limited to the Superior and Limited Jurisdiction Courts.  She is dedicated to working for her clients through the trial level and beyond.  She has represented many clients at the appellate level in the Arizona Court of Appeals and the Arizona Supreme Court.  She is admitted to practice in the United States District Court of Arizona, United States District Court of Ohio, Southern District, and in 2019, was admitted to practice before the United States Supreme Court.

Thank you Virginia for your continued service to your clients and Mohave County.