Getting a Criminal Case Expunged 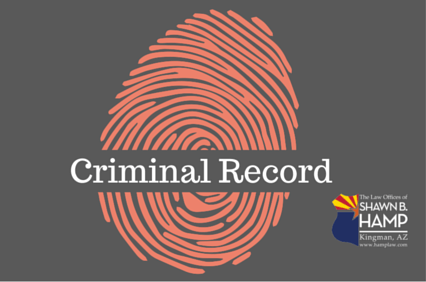 You can only seal a criminal record or conviction under very limited circumstances in Arizona.

One of the devastating collateral consequences of being convicted of a crime is having a criminal record.  Just being arrested or charged with a crime can follow you.

Having a criminal conviction, whether a Felony or a Misdemeanor can make you ineligible for many quality jobs, or prohibit you from employment that requires a security clearance (fingerprint card).

When an individual is arrested in Arizona, or they are charged with a crime in a criminal court, that record is reported to the Arizona Department of Public Service (AZ DPS) Criminal History Records Division.  AZ DPS serves as the clearing house for all criminal records generated by law enforcement and courts in the State of Arizona.  Arizona Courts must also report the disposition of all criminal cases to AZ DPS.

These records are then forwarded to the FBI Criminal Justice Information Services Division (CJIS).  Information from the FBI CJIS can therefore be accessed by any law enforcement or government agency in the United States that has access to official F.B.I. criminal background checks.

Note: You can request a copy of your “rap sheet” or criminal history with the FBI by going to their website.

Unlike other states, Arizona does not have a regular process to get your criminal record expunged or sealed.

But their are two limited exceptions to get your record sealed.

Offenses Committed As a Minor on Felony Probation.

If you commit an offense as a minor generally your record can be sealed.

A juvenile's case who is charged with a crime in juvenile court is not public record.   The information is only available by government background checks.

A. The court may enter a judgment of guilt and place the defendant on probation pursuant to this section if all of the following apply:

1. The defendant is under eighteen years of age at the time the offense is committed.

2. The defendant is convicted of a felony offense.

3. The defendant is not sentenced to a term of imprisonment.

4. The defendant does not have a historical prior felony conviction.

B. If the court places a defendant on probation pursuant to this section, all of the following apply:

1. Except as provided in paragraphs 2, 3 and 4 of this subsection, if the defendant successfully completes the terms and conditions of probation, the court may set aside the judgment of guilt, dismiss the information or indictment, expunge the defendant's record and order the person to be released from all penalties and disabilities resulting from the conviction. The clerk of the court in which the conviction occurred shall notify each agency to which the original conviction was reported that all penalties and disabilities have been discharged and that the defendant's record has been expunged.

Getting your record sealed for an offense committed while under eighteen years of age but placed on Adult Probation is totally discretionary and up to the judge.  It is not an automatic right to have your record sealed, and the Court must petitioned to do so.

As explained earlier, merely being arrested or charged with a crime will create a public record that can tarnish your reputation.  Even If the case is subsequently dismissed or if you are acquitted at trial and found “NOT GUILTY”, the arrest and court record will still follow you.

Under A.R.S. 13-4051, a person who is wrongfully accused may petition the court to have their public record cleared but the burden of proof rests with the petitioner.

A. Any person who is wrongfully arrested, indicted or otherwise charged for any crime may petition the superior court for entry on all court records, police records and any other records of any other agency relating to such arrest or indictment a notation that the person has been cleared.

B. After a hearing on the petition, if the judge believes that justice will be served by such entry, the judge shall issue the order requiring the entry that the person has been cleared on such records, with accompanying justification therefor, and shall cause a copy of such order to be delivered to all law enforcement agencies and courts. The order shall further require that all law enforcement agencies and courts shall not release copies of or provide access to such records to any person except on order of the court.

C. Any person who has notice of such order and fails to comply with the court order issued pursuant to this section shall be liable to the person for damages from such failure.

It is not sufficient to be merely presumed innocent, a defendant essentially must prove their innocence to the court to consider that “justice will be served” by ordering that all court records and police records be sealed relating to any arrest, or indictment.  It can be a difficult challenge when the burden is shifted to the accused.

Getting A Conviction “Set Aside”

Getting a conviction “set aside” in Arizona under A.R.S. 13-907 is legally the equivalent of having your case dismissed.  There is still a public record of the arrest and previous conviction, but legally it has the effect of having the case “dismissed”.

To get a criminal conviction “set aside” a defendant must have completed their entire sentence and probation and must have paid all fines and restitution previously ordered.

(Mohave County Superior Court “How To Video” to set aside criminal conviction and restore civil rights,)

It is completely at the discretion of the sentencing judge whether to grant a petition to set aside a conviction.  Before filing a petition it may be best to consult with an attorney to determine the likelihood of success or whether certain factors or reasons should be given to the court to consider in granting the petition.

Setting Aside A Criminal Conviction