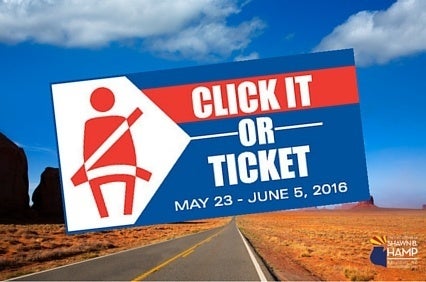 Kingman, AZ – In an effort to save more lives on Arizona's roadways this month the Governor's Office of Highway Safety is partnering with the Kingman Police Department and other local law enforcement agencies to enforce Arizona's seat belt and child safety seat laws.

Arizona presently conducts enforcement under a secondary seat belt law and a primary child safety seat law under A.R.S. 28-907 and 28-909.

Arizona's occupant protection laws involve a secondary seat belt law and a primary child safety seat law.  For this reason, a police officer cannot stop a vehicle based solely on non-seatbelt use.  However, police may stop a vehicle if a child under the age of five is unsecured in a vehicle.

A violation of the seat belt law is a civil traffic violation. It is punishable with a civil fine of $71 and $146 for a child safety restraint violation.

The enforcement campaign is based upon high visibility traffic enforcement with a “zero-tolerance” approach towards seat belt and child safety seat usage.

The Arizona program is part of the national “Click It or Ticket” seat belt enforcement campaign, law enforcement agencies across the state will be stepping up traffic enforcement patrols and increasing other enforcement efforts to drive home the message: Buckle Up Arizona…It's the Law!

In an effort to save more lives on Arizona’s roadways the Governor’s Office of Highway Safety is partnering with… https://t.co/aviEUIgtZ1

In an effort to save more lives on Arizona’s… https://t.co/2tJ8ZX2Nuc

Despite widespread efforts to educate drivers about the importance of wearing seat belts, motor vehicles collisions continue to be the leading cause of death and serious injuries to the citizens of our state. The enforcement mobilization will run from May 23, 2015 through June 5, 2016.

Regular seat belt use is the single most effective way to protect people and reduce fatalities in motor vehicle crashes. When worn correctly, seat belts have proven to reduce serious crash-related injuries and deaths by about 50%. The proper and consistent use of child safety seats has been found to reduce the risk of fatal injury by 71% for infants (younger than 1 year old) and by 54% for toddlers (1 to 4 years old) in passenger cars. Properly installed booster seats reduce the risk for serious injury by 45% among children ages 4 to 8 years old.

Funding for the campaign was provided by the Arizona Governor's Office of Highway Safety.  The campaign coincides with the Memorial Day Weekend when increased DUI patrols are also expected.