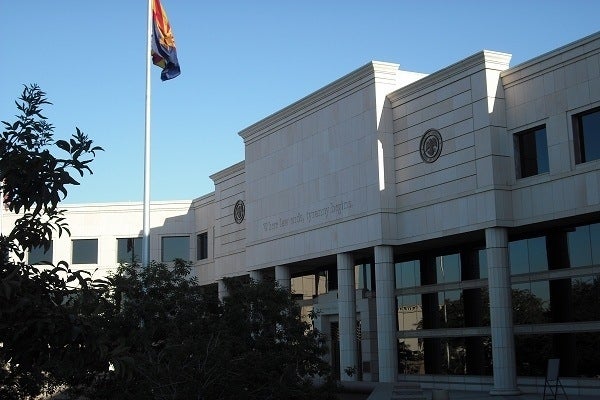 In a unanimous decision released in November 2017, the Arizona Supreme Court struck down an unconstitutional condition placed on a defendant awaiting trial—and shook up the legal framework for pretrial release conditions along the way. This decision might provide a legal basis to challenge overly burdensome release conditions imposed on some defendants in Arizona.

In Arizona, as in many states, people arrested and charged with a crime are often taken to jail. Within 24 hours, they are brought before a judge, who reviews the allegation and decides what release conditions to set. Even though a defendant is presumed innocent until proven guilty at trial, the court can still impose a wide variety of restrictions, which may not be lifted until after the trial. The result is that even a person who is ultimately declared not guilty at trial may have already endured months or even years of onerous court-ordered conditions.

Release conditions come in various forms. The most famous is the bond, a monetary payment to the court that is returned only after the defendant successfully attends all court hearings. Others include an order to have no contact with the victim, a restriction on travel, or a prohibition on access to dangerous weapons. The Arizona Rules of Criminal Procedure lay out the types of release conditions in Rules 7.2 and 7.3, and although the rules theoretically limit release conditions to those listed in Rule 7.3(b), the last item on the list is "any other non-monetary condition," so the possibilities are widely varied. This is not to say that there are no limits on release conditions; any condition imposed must be reasonable and necessary to protect the public or the person, and the condition must be the least burdensome method to do so.

This brings us to the case of Sammiuddin v. Nothwehr, the recent Arizona Supreme Court decision. The defendant in that case, Mohamed Sammiuddin, was charged with multiple counts of public sexual indecency to a minor for allegedly performing a lewd act in his home, in view of minors who could see through his window. He denies the charge, maintaining his innocence and the weakness of the State's case throughout the proceedings. However, even though none of the alleged victims were related to him, the court imposed a release condition that he have no contact (later changed to no unsupervised contact) with his own family, meaning he could not return home until the conclusion of his case. This was especially problematic because he and his family were Rhohingyan refugees, fleeing the genocide in Myanmar; with limited contacts in the United States, they especially needed to stick together.

Mr. Sammiuddin actually lost on most of his arguments before the Supreme Court, which determined that such conditions could, in the right circumstances, comply with the United States and Arizona Constitutions and the Arizona Rules of Criminal Procedure. However, the Court ultimately vacated the conditions and sent the case back to the trial court for further review. In so doing, the Court held that trial courts must "make findings and articulate [their] reasoning for determining that the condition is the least onerous measure reasonable and necessary to mitigate an identifiable risk of harm."

This is significant because it could mean that unusual release conditions that are imposed without a specifically articulated finding that the condition complies with Arizona law may violate due process rights. This decision could lead to the overturning of many different kinds of release conditions in active cases throughout the state.

Are you awaiting trial, and are you burdened with overly severe release conditions while you wait? You may have a basis to challenge those conditions. Call The Law Offices of Shawn B. Hamp at (928) 753-6868 for a free case consultation.

Troy M. Anderson has achieved excellent results for our clients in hundreds of cases throughout northwestern Arizona. He has appeared in twenty-six different courts, including arguing a case before the Division One Court of Appeals. Mr. Anderson has been the lead attorney on over 500 cases and has gone to trial numerous times for cases ranging from single counts of speeding to multiple felony charges; he has had more acquittals than guilty verdicts in the trials.