Speeders Targeted On Their Way To Grand Canyon West 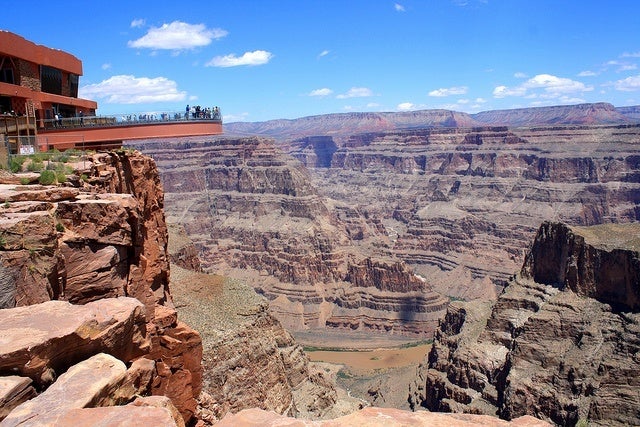 One of the most spectacular attractions in Mohave County, Arizona (besides Hoover Dam, the London Bridge, or any one of the magnificent reservoir lakes of the Colorado River) is Grand Canyon West.  It is located South East of Las Vegas and North East from the county seat of Kingman, AZ.  It is home to the Grand Canyon Sky Walk, a multi-million dollar cantilever observation platform that extends 70 feet over the sheer canyon walls with a glass bottom view of the canyon floor 4,000 ft below.

The Grand Canyon West is operated by the Hualapai Indian Tribe.  The views of the canyon are totally unobstructed.  It displays the final decent of the Colorado River as it leaves the Grand Canyon and flows into Lake Mead.

Grand Canyon West is approximately 120 miles from Las Vegas Nevada.  U.S. 93 is the route taken to get to the turn off on Pierce Ferry Road.  This roadway takes tourist and visitors to the popular destination. Long two lane roads, a Joshua Tree Forest, and a stretch of undeveloped dirt road awaits those taking the rental car and tourist bus journey to this wonder of the world.

The journey is long.  Many Las Vegas and international tourist shorten the trip by traveling as fast as they can to the canyon and back.  The highest posted speed of the two lane roads is 45 mph.  What would normally be an hour and a half trip on the interstate easily becomes a six to eight hour round trip away from the slot machines on the Strip.  It is no surprise that motorists attempt to shave as much time as they can from the long car ride.

Any motorist commits criminal speeding in Arizona by 1) Exceeding 35mph while approaching a school zone, 2) Driving more than 20mph over the posted speed limit in a commercial or residential area, or 3) Traveling over 85mph anywhere in the State of Arizona.  Pierce Ferry Road runs through the small town of Dolan Springs, Arizona.  The elementary school named after the neighboring mountain of Mt. Tipton is also on the main road.  A driver can easily exceed these speed limits going thru this residential and commercial zone.  Stepping on the accelerator on the wide open Diamond Bar Road is far too easy in the vast desert.

The Mohave County Sheriff is waiting to ticket those motorist. An intensive detail targeted these speeding motorists in 2011. “MCSO Nails Drivers On Fast Track to Grand Canyon West”, Kingman Daily Miner, August 23, 2011. The law enforcement detail was in response to two fatal accidents involving tour buses that occurred the year prior. Citing Sgt. Don Bischoff, of the Mohave County Sheriff's Department, Erin Taylor of the Kingman Daily Miner reported that 1,300 vehicles travel on the roads leading to Grand Canyon West. With 85% of the drivers on the final stretch of Diamond Bar Road leading into Grand Canyon west traveling an average of 87mph!   The average speed into Dolan Springs, Arizona was 65mph, well above the posted 45mph limit.

The Sheriff's office continues its strict enforcement of the traffic laws on the Grand Canyon West roadways.  The Mohave County Sheriff's Office was back in force in early 2014.  “Traffic Enforcement Detail Planned At Gateway to Grand Canyon West”, Mohave Daily News, February 7th, 2014.  The Mohave Daily News quoted Sgt. Bischoff who said,  “During this special detail, officers will intensify enforcement of posted speed limits in the Dolan Springs area. We'll stop and ticket anyone caught speeding — especially on Pierce Ferry Road and Diamond Bar Road, where most of our speed-related crashes occur.”

Motorists that are cited for speeding offenses on U.S. 93, Pierce Ferry or Diamond Bar Road are summonsed to appear at the Kingman/Cerbat Justice Court.  The courthouse is located at 524 W. Beale St. in Kingman, Arizona.  Both civil and criminal traffic infractions are administrated from this court house.  While many infractions can be handled over the phone or mailed in to pay fines, litigating a ticket can be an inconvenience to travelers from a far if they don't seek assistance from counsel.

During this special detail, officers will intensify enforcement of posted speed limits in the Dolan Springs area. We'll stop and ticket anyone caught speeding — especially on Pierce Ferry Road and Diamond Bar Road, where most of our speed-related crashes occur. – Sgt. Bischoff – Mohave County Sheriff's Department.

If you drive to the Grand Canyon West, plan enough time for the drive.  Enjoy the view when you get there.  Slow down on your way back.  The Casinos will still be open, we promise!