What is an Arizona "Safety Corridor"? 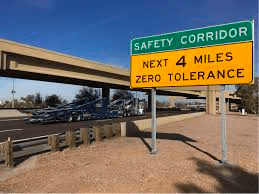 Arizona has implemented "Safety Corridors" in stretches of Arizona Highways

What is a Safety Corridor?

If you have traveled on I-40 around the Kingman area, you have likely noticed the signs indicating “Safety Corridor” and “Zero Tolerance”.
The Arizona Department of Transportation, Arizona Department of Public Safety and the Governor's Office of Highway Safety identified these areas as sections of highway with higher than expected number of crashes, injuries and deaths.

The Phoenix New Times reported in January that 63 miles of roads were selected as high-profile "Safety Corridors" in which state troopers will practice so-called zero tolerance enforcement. These roadways include:

This pilot program is scheduled to exist for at least 2 years. (AZ Dept. of Transportation press release)

The roadway signs identifying the safety corridor mean what they say, there is NO tolerance for speeding or any other type of traffic infraction.

There is increased law enforcement presence in these areas. Officials plan on using aircraft and unmarked patrol cars for state troopers to pull over drivers in these areas who are going even just a few miles per hour over the posted speed limits and target any drivers making hazardous or other illegal maneuvers.
If driving in one of these designated safety corridors, you will face being pulled over and ticketed or warned for such behaviors.

In the Kingman area, the safety corridor stretches for 23 miles, between mileposts 49 and 72.

While the reason for the zone is reportedly a safety concern, the resulting interactions often lead to DUI investigations, as well as investigations into drug activity, weapons infractions or money laundering allegations.

What should you do if stopped in the Safety Corridor?

Once stopped by law enforcement, you may be asked if you mind if a K-9 is run around your vehicle. You do not have to consent to that, but you should be clear in voicing your refusal to it.

If you are asked about consenting to a search of your vehicle, you do not have to agree to it. Again, you should be clear about your refusal to the request. You should ask if you are free to go.

As with any traffic stop, Do be cooperative, do be polite, do provide the necessary information such as your driver's license, insurance card and registration. If it turns into an investigation into suspected criminal activity and past a traffic stop - Do invoke your right to remain silent and do invoke your right to speak with an attorney if you are placed under arrest.

If you are detained, arrested and charged after a traffic stop in the Safety Corridor, call our office of experienced criminal defense lawyers and let us evaluate your case and your options going forward. Attorneys Shawn B. Hamp, Virginia L. Crews and Troy Anderson are able to handle your criminal traffic or felony matter.

Criminal attorney Virginia L. Crews has also practiced law for over a decade. An experienced trial attorney and Justice of the Peace pro tem, Ms. Crews has participated in an extensive variety of criminal trials, civil trials and appellate oral arguments. Additionally, given her educational backg...