Williams is a town in Coconino County, Arizona. Located right on historic Route 66, Williams still had a significant population of 3,023 during the 2010 census, making it one of the few towns that remained intact after the interstate drew much of the car traffic off Route 66. Williams' survival and its continued reliance on tourism is due in large part to being on the southern terminus of the iconic Grand Canyon Railway, making Williams a popular destination for Canyon-goers who still want to be in a populated area while they take in the sights. Additionally, Williams is surrounded by other outdoor recreational opportunities, including fishing, hiking, biking, and camping. 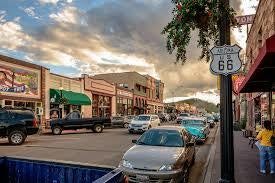 When compared with the rest of the state of Arizona, the town of Williams is slightly below average when it comes to the affluence of its residents. According to the website CityData, while Arizona's median household income in 2015 was $51,492, it was $42,535 in Williams, a 21% decrease. Even this affluence is not distributed very equally for Williams locals: 28.1% of the residents lived beneath the poverty level in 2015, including nearly 40% of Hispanic residents.

Perhaps because of the wealth discrepancy, crime in Williams is significantly more likely than elsewhere in the U.S. In an attempt to reduce the crime rate in Williams, the town employs a massive police force for the town's size, with 20 full-time law enforcement officers on duty, or 3.54 for every 1,000 residents, considerably higher than the 1.88 Arizona state average.